Did you know it’s been 500 years since the Protestant Reformation? For the last month or so I’ve been sharing some short biographies of key reformers.

John Knox is the Father of the Scottish Reformation. While working as a priest, Knox was introduced to the gospel through a man named George Wishart, who was eventually killed for his faith. Seeing his mentor martyred ignited a passion in Knox to devote his life to gospel preaching. Fleeing persecution, Knox went to Geneva and sat under the preaching of John Calvin. His time in Switzerland enabled Knox to produce theological works which inflamed not only the hearts of his fellow believers, but the hatred of those ruling Scotland. While he was pastoring an English-speaking congregation in Geneva, Knox’s goal was to return to Scotland and spark revival. His motto: “Give me Scotland, or I die!”

Finally able to return to Scotland, Knox’s gospel preaching was received by the burgeoning revolutionaries who were preparing to revolt against their Catholic Queen, Mary Queen of Scots. As the hostilities ended, Knox established the Reformed Church of Scotland – which became Presbyterianism. Knox’s fiery determination to stand with the gospel against human authority inspired his countrymen and left a lasting legacy of faithfulness. His ability to unite reason and passion in the pulpit has influenced centuries of preachers. Today, John Knox is buried, ignominiously, underneath a parking lot behind St. Giles Cathedral. You can visit him in space #23. 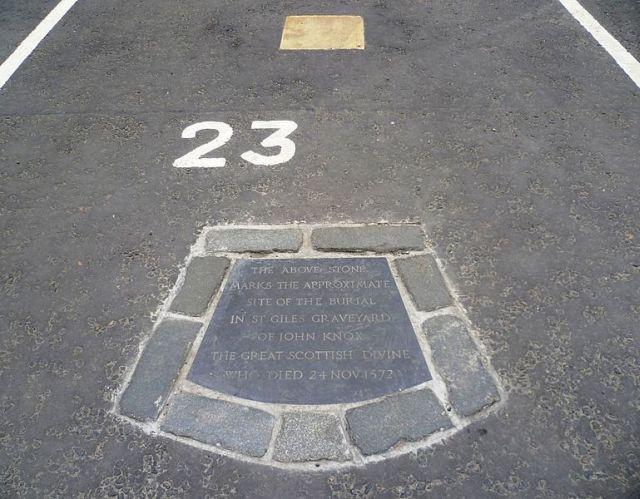