Thanksgiving is undeniably American, but in the late nineteenth century, Norfolk Island was to have a great deal of contact with the American church culture through the visits of American whalers and their wives, who often stayed on the island for extended periods of time.

Isaac Robinson was a trader who had settled on the island in the early 1860’s (he married Hannah Quintal). Perhaps because his home was so close to the pier where the whalers came ashore, Robinson eventually became a great friend to the Americans, eventually holding the title of “American Consul” (although no one is sure that this was an official position). No doubt some of the whalers and their wives, feeling a little homesick, shared stories of their Thanksgiving celebrations back home, and Robinson decided to try the idea here. Back in the states, Thanksgiving coincided with Autumn harvests, but in Norfolk’s milder climate, it was still possible to hold a sort of Harvest Festival in November, which was the island’s late Spring. The first record of Thanksgiving on Norfolk Island is in an entry in John Buffett’s diary in 1896. A service was held in All Saints. Three of Robinson’s friends helped him decorate All Saints Church in the capital, Kingston, using only palm leaves and lemons, and though he died and was buried at sea the next year, his notion caught on. For Norfolk’s second Thanksgiving service, the parishioners brought down all sorts of produce to decorate the church. 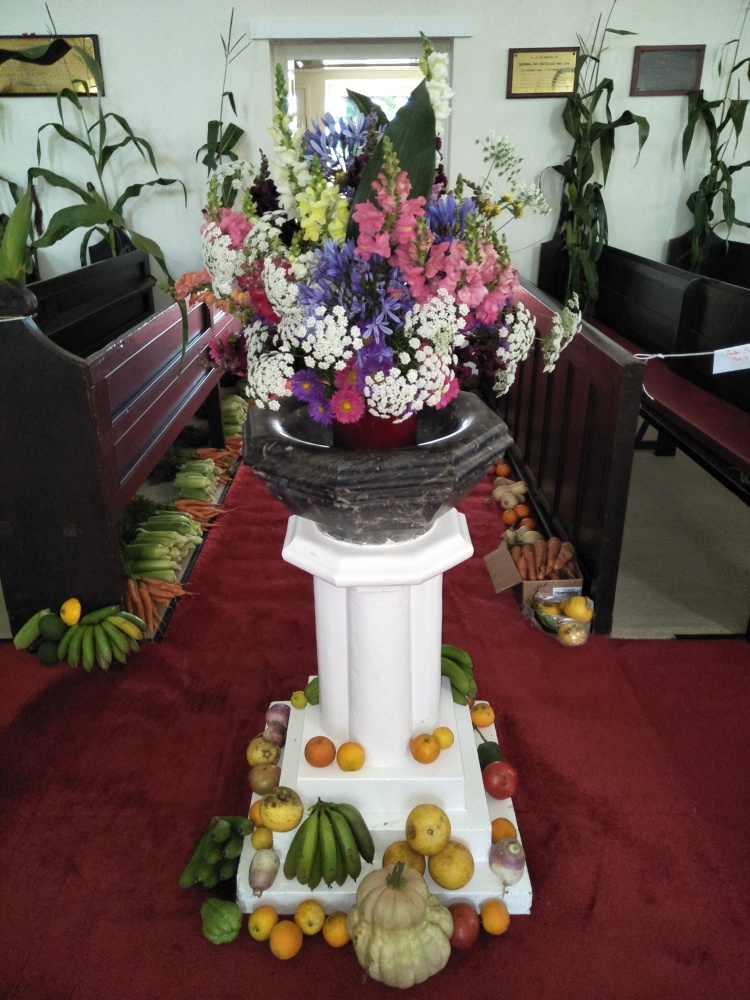 It is probable that Thanksgiving services were also held in the other churches on the island from those early years, because both the Methodists and the Seventh Day Adventist churches were founded under American influences. On Norfolk Island, Thanksgiving Day is celebrated on the last Wednesday in November, while the United States observes it on the fourth Thursday. Thanksgiving was to become firmly embedded in the island’s calendar and culture as an important tradition. And so it is to this very day.

This year All Saints was transformed with cornstalks, laden with fully formed cobs, tied alongside each pew. Along with the corn, there are stalks of sugar cane, magnificent urns of flowers, and the aisles and foyer are filled with piles of fruit, vegetables and baked goods. The setting up is carried out by a loyal band of helpers the day before. It is an activity that is almost as traditional as the Thanksgiving itself. During the afternoon, people arrive with contributions – bunches of bananas, boxes of fruit, sacks of potatoes, the best that Norfolk gardens and farms can produce.

The day itself is very much a family occasion, and many folk really make the effort to get there and enjoy the celebration of our island, its people and its produce. This year, we not only had a visit from Bishop Michael Stead, who is the Bishop for Norfolk Island, but we were also delighted to meet “Petal the puppet”, who came along especially to teach the kids about Thanksgiving! 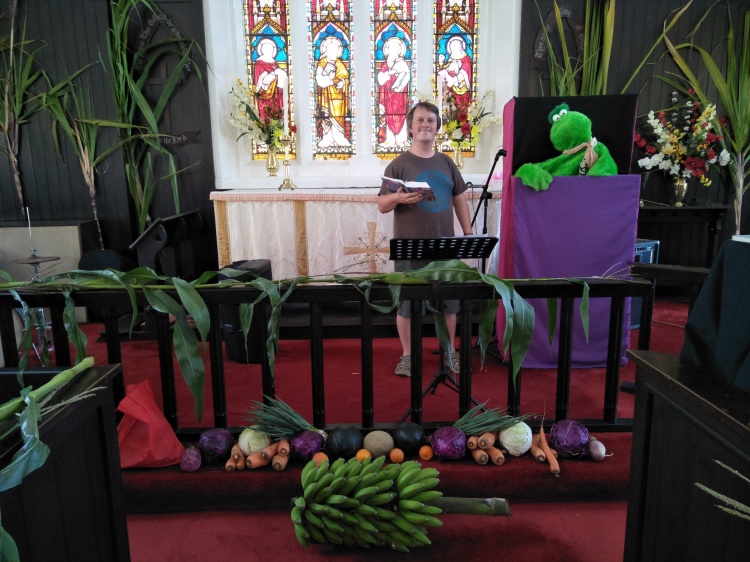 Before the service, the Nobbs brothers (with young Arki Nobbs on piano) entertained the slowly building congregation with some island favourites. As the Bishop and Chaplain Rev. David Fell entered the body of the church, they were led in by Liam Christian-Bailey carrying the processional cross. The congregation struck up the Doxology, and everyone was in fine voice. The Lord’s prayer was said in the Norf’k langwij (Norfolk Island language) by Mr. Albert Buffett, President of the Norfolk Island Council of Elders, and later in the service, the scripture for the day, Psalm 103, was read by Mr. Albert Buffett, and US Chargé d’Affaires Mr. James Carouso. 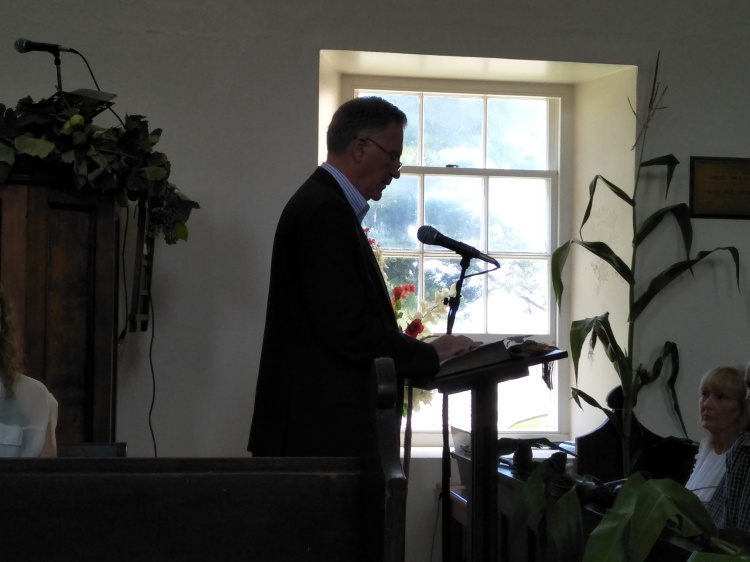 In his message, Bishop Michael stressed the importance of thanking God for all his benefits, reminding us from Psalm 103 that in Christ Jesus, God has been gracious and compassionate toward us, and abounding in steadfast love. “This Thanksgiving Day, God doesn’t want us to only say thank you for the beauty and bounty of the earth, good though that is. This is a day to forget not all his benefits”.  The Bishop noted that we need a day like Thanksgiving to remind us to do this, because by default we don’t give God the thanks that he rightly deserves. We take for granted all the good things we have, without pausing to acknowledge their source. He said that this was like a teenager who ignored their parents, but still expected to have their food and WiFi laid on! 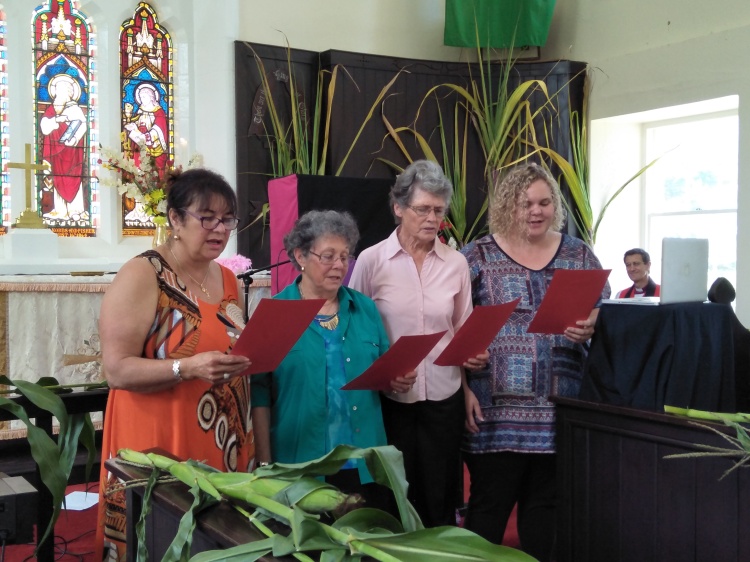 A special treat during the service was when “some Quentl gairls” sang Gustav Quintal’s beautiful hymn “Oakleigh” (wonderfully sung by Gaye, Joy, Rosalie and Chelsea). This too was greeted with an enthusiastic applause. Peter Randall and Phil McDowell played the organ. At the end of the service, Don Reynold led us in the singing of the Pitcairn Anthem. The Bishop and Chaplain were led out, and the congregation remained seated while helpers carried the goods and produce to the tables outside, where over the next busy half hour most of it was sold to both visitors and locals. The fat fresh corncobs were especially popular, and the children had fun with the stalks of sugar cane. 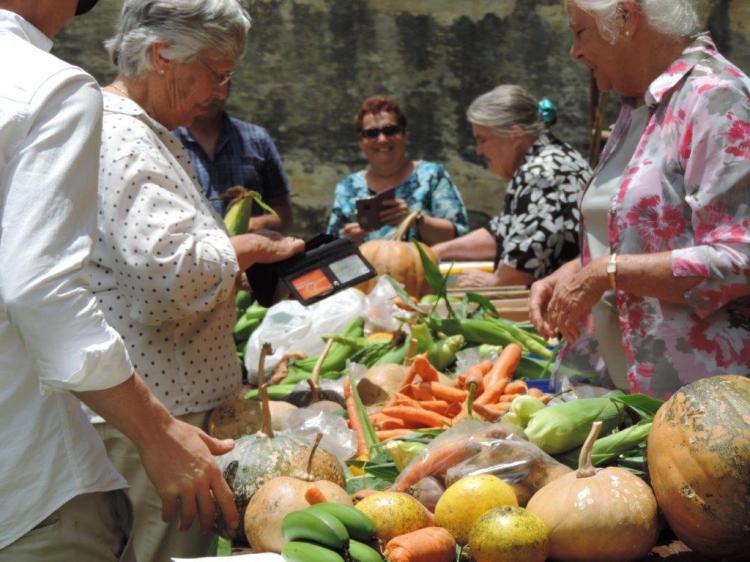 The other churches had successful days too and because the Adventists have their service in the afternoon, many folk took the opportunity of attending two services over the day. Others had celebratory lunches with friends and family, and made the most of the beautiful weather with picnics and barbecues. Now that our Food Festival occurs in Thanksgiving week, we are doubly grateful for what our island provides, and for the people who share their skills and talents to bring it to our plates.

One thought on “For as long as anyone can remember, Norfolk Island has celebrated Thanksgiving…”